With every update of iOS comes the promise that your existing phone is going to become an entirely new device at no extra cost. While that's not always the case, iOS 13 does have a lot of nifty features, some of which might live up to outrageous expectations.

The latest version of iOS has optimized battery charging, which means that it keeps the life of your lithium-ion going longer by charging it up to only 80 percent most of the time and 100 percent when you need it. Considering that battery life is one of the biggest frustrations of phone ownership, this is a big deal.

If you're looking for something a little more frivolous and fun, then accessorize your Memoji with makeup, glasses, piercing, and more. Beauty influencers Desi Perkins and Patrick Starrr (or rather their Memoji) highlighted this feature at WWDC with lots of style and little drama.

The update arrives on Sept. 19; Apple has not specified an exact time, but in years past, it's rolled out around noon ET, so keep an eye on your iPhone. Not every phone will support iOS 13, though. You'll need an iPhone 6s and above or a seventh-gen iPod touch. (iPads can update to iPadOS on Sept. 30). If you have one of these and are looking to update, here's how.

You can either wait for your phone to remind you with a pop-up alert that iOS 13 is available or you can force a manual update. (Before you update, it's always a good idea to back up your data.)

Navigate to Settings > General > Software Update and select Download and Install. If your iPhone has a passcode, you'll be prompted to enter it. Agree to Apple's terms and then...wait. You'll see Update Requested on the screen, which means Apple has added you to its download queue.

Once it begins downloading, you'll see a time estimate bar up top; how long you'll wait depends on how many people are trying to upgrade. Your phone will then need to reboot, which could also take a few minutes.

If there's not enough room on your iOS device, you'll get a message asking to temporarily remove apps. Hit Continue and the apps will be restored when the installation is finished. If you have trust issues, hit Cancel and remove apps manually before returning to the update.

If you need your phone during the day, there's also the option to Install Tonight, which will do exactly that—install iOS 13 while you sleep, provided your device is charging.

And if you have iOS 12 installed, you can turn on automatic updates. Go to Settings > General > Software Update > Automatic Updates. Your iOS device will then automatically update to the latest version of iOS overnight when it's plugged in and connected to Wi-Fi.

There will be several iterations of iOS 13 before Apple unveils iOS 14 next year, and if you want to be the very first to try out new features, join the Apple Developer Program.

The program is designed for app developers—individuals and companies. If you're in it just to get the latest iOS, provide your Apple ID and some basic information about yourself, and pay the membership fee of $99 per year.

A note of caution, though: since you'll have an early version of iOS, you'll face bugs that are more than the minor annoyances you're used to on stable versions of iOS. The entire point of developers having the software is to test it out with their apps, so you might find that some of your apps become unusable or that you lose information. Make sure you're comfortable with that before signing up. Or install the dev version on a second, non-primary iOS device.

If you're not risk-averse but a bit cautious—and want to save $99—there's always a public beta released before the final version of iOS and it's fairly stable. Some of your existing apps might not work with the OS and you could lose data, but if you're willing to try it out there's no fee to join.

The point of a public beta is to find bugs developers have not yet uncovered. If you're an iOS fan, this can be an interesting side project. Especially if you have an older iOS device you can afford to upgrade with possibly buggy software.

Make sure to back up your phone before you do anything. Then sign up for the Apple Beta Software Program. If you've done this before and already are registered, sign in. Next, open Safari to beta.apple.com/profile and select Download Profile. Approve the installation, restart your phone, and connect to a Wi-Fi network. Now go to Settings > General > Software Update and select Download and Install. Once your phone restarts, you'll have the latest version of iOS. If you come across any bugs, use the built-in Feedback Assistant app to report them. 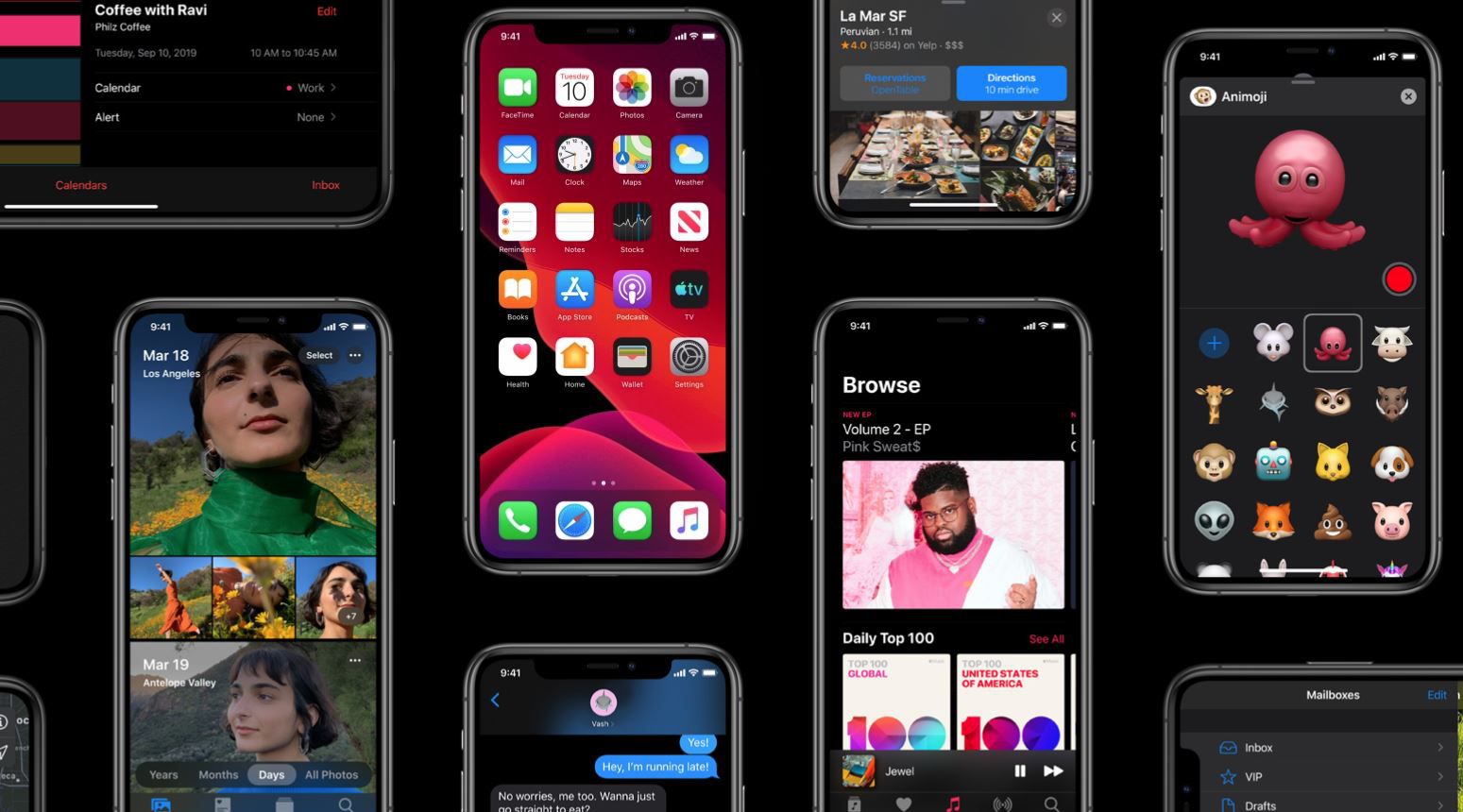 See if your iPhone or iPad works with the new OSes

Check out the most interesting and useful new additions to Apple's iOS experience, from Dark Mode and video editing to privacy-focused features like Sign In with Apple.

With a single button, you can effectively stop unknown callers from making your iPhone ring ever again. With the feature enabled, iOS 13 will only allow calls through from your contacts and numbers found in Mail or Messages.

Everyone else will go straight to voicemail.

For years we've thought it would make sense for there to be some method to connect to Wi-Fi networks and Bluetooth devices from Control Center, instead of having to open the Settings app and tap several times.

With iOS 13, Apple has finally made it possible to view and connect to available networks or devices without ever opening Settings. Hallelujah. For us, this fixes one of the iPhone's most annoying quirks. Android users have been swiping their keyboards to type for years, through a number of third-party apps, like Swype and SwiftKey. At long last, Apple has added the capability, letting you trace a word to spell it out.

Apple calls it QuickPath Typing. In theory, it's faster than and just as accurate as pecking away at the virtual keyboard, and you still get spelling suggestions as you go along.

The feature is especially useful for one-handed typing and is ready for use as soon as you install iOS 13. Dark mode for all

Dark mode, which replaces the usual light screen with a dark screen, is available across core apps in iOS 13, including the calendar, music and photo apps.

This appears to be systemwide, but we'll need to see if there are any exceptions. Dark mode is a popular trend across apps and will come to Android Q, too. The Photos app received a pretty significant overhaul. Organizing and surfacing photos are both now easier, and the edit tools have a new look. But most impressive is the ability to use all of the picture editing tools you're familiar with on videos in the Photos app.

Yes, that means you can apply filters, adjust brightness and even crop a video right in the Photos app. This is what you need to know about photos in iOS 13.

The iPad is growing into its own computing platform, and with it comes plenty of new gestures used to get around apps and the homescreen. From opening multiple apps, or quickly switching between workspaces, we have you covered.

One of the best parts about using new software is finding features that haven't been announced. Often these features are the most notable in a major update, and iOS 13 has its fair share of hidden features.

Naturally, hidden features have to actually, well, be discovered, so right now the current tally of hidden features worth highlighting is at 11. As we uncover more, that list is sure to grow.

Apple will still limit font selection for iOS as a whole; however, the company is opening up iOS 13 to allow custom fonts inside apps.

The added flexibility is perhaps an indicator that Apple is loosening its grip on controlling every aspect of the user experience. We haven't had a chance to try it out yet, but rest assured, once Apple begins publishing new fonts in the App Store, we'll be all over it. This is everything we know about installing, managing and downloading custom iPhone fonts.

Find My Phone and Find My Friends join forces

Apple combined Find My Friends and Find My iPhone into a single app now called Find My. And on top of combining the apps, Apple added the capability to help find lost devices for people you don't even know.

When you mark one of your Apple devices as lost, Apple will crowdsource the device's location by asking all Apple devices to look for your device's Bluetooth signal. Once another Apple device finds your lost phone, tablet or computer, you'll receive an alert. Apple says the free service is completely anonymous and encrypted.

A new privacy feature called Sign In with Apple logs you into accounts and apps without your having to add your email address, which Apple says will protect users from third-party apps that want to track them.

You can also choose to share or hide your email address, and can ask Apple to create a random email for the app or service that forwards to your actual email address, therefore masking your real identity without your needing to use a junk account.

Apple also blocks apps that track your location from Wi-Fi and Bluetooth and lets you decide if you'd like apps to ask your permission each time they request your location data. Apple's Messages apps will now get support for Memoji profiles, which puts a thumbnail of your Memoji (an emoji of your face) into the Messages app. New controls let you go in depth with customization, makeup -- even adding braces to your teeth. You also get a sticker pack across your iOS 13 devices.

iMessages will also now work on dual-SIM phones (unfortunately, we don't have more detail than that).

Share music or a movie with a second pair of AirPods

Instead of sharing an AirPod with a friend or loved one, your iPhone can now stream audio to two pairs of AirPods thanks to Audio Sharing. If you've used Apple Pay to buy something, you're already a pro at setting up Audio Share.

Apple's voice assistant Siri gets an audio update in iOS 13. Instead of the clipped tones often associated with AI, Apple is hoping the new Siri will sound smoother and more natural to your ears. Using a neural talk-to-speak network, Siri will speak with fewer gaps and fewer inhuman-sounding modulations.