Apple just released its big new software update for Macs. It’s called macOS Catalina. Like iOS 13, which was recently released for iPhones, it offers a lot of new features for most Macs made in 2012 or later.

Here’s a look at what’s new and how to update your Mac. 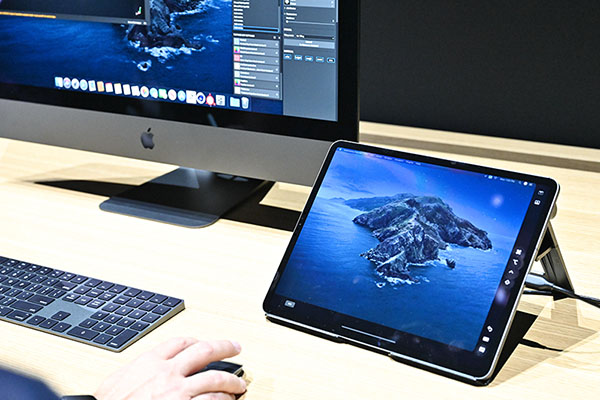 Sidecar is a new option that lets you use your iPad as a second display on your Mac. This is useful if you’re at a desk and want to drag windows over to another screen. To use it, tap the AirPlay button in the top-right corner of your screen and then select your iPad. It works with newer iPads that support the Apple Pencil, and you don’t even have to plug your iPad into your Mac. I tried Sidecar briefly on a beta of macOS Catalina and liked that there wasn’t any lag and it worked just like I had plugged a second monitor into my computer.

iTunes is dead in macOS Catalina. It’s replaced by three separate apps: Apple TV, Apple Music and Podcasts. It’s a smart move, since Apple users have complained for years about how clunky and bloated iTunes has become. Now, everything is separated into different places. It works well, since now I don’t have to dig around iTunes to find my movies or the music tab. I can just open the app for what I need.

Music is focused purely on Apple Music streaming and the tunes you’ve purchased. You can browse your library, find new music in Apple Music if you pay for it, or buy and download new tunes.

Apple TV lets you watch and download movies you’ve purchased, browse through Apple TV Channels such as HBO and Showtime and, soon, will let you play shows from Apple TV+.

Podcasts lets you play your favorite podcasts and find new ones. A cool discovery feature I like also lets you search for content inside podcasts. So, if there’s a person or topic you’re interested in, you can find if it’s been mentioned in any podcasts through search.

Apple Arcade recently launched on iPhones and iPads, and now it’s on the Mac as well. This is Apple’s $5 per month premium game service. Some games support Xbox One or PS4 controllers. You can easily connect them with Bluetooth and use them to control a game. There aren’t as many games in Apple Arcade for Mac as there are on iPhones and iPads, but new games are launching soon and will continue to be released.

Catalyst on macOS Catalina is a new feature that lets developers port over their iPad apps to Mac. Apple first started this last year by launching some of its own iOS apps on the Mac, including News and Stocks. This year, Podcasts was built using Catalyst.

The tools allow developers to bring over their existing iPad apps right to the Mac, which means you might start to see some of your favorite apps that weren’t otherwise available on your computer. Some of the apps I’ve tried include Carrot Weather and TripIt, which gives you an overview of your trips including flight times, hotel and car reservations and more.

How to update to macOS Catalina

That’s just a taste of what’s new in macOS Catalina. There are new accessibility features that let you control your Mac by voice, Screen Time controls that will limit how long you can use certain apps and new security features. A full list of the changes is available on Apple’s Catalina website.

Before you update your Mac to macOS Catalina, make sure you’ve backed up everything you need. Plug your Mac in and make sure you’re connected to a fast Wi-Fi network. And make sure you have about an hour or so of free time where you don’t need to use your computer.

I prefer the method above, but you can also find macOS Catalina in the Mac App Store.